This site was created by Mr P. Kitchener and supported by freeola.com

My name is Paul Kitchener.  I have Cerebral Palsy; which means I have to use a wheelchair.  I am married to Anne, who also has Cerebral Palsy and we’ve been married for 18 years.  I’ve been attending the service since 1999 and seen lots of changes over years.  Now I’m happy with the latest reboot.  Let me tell you why, since I started school at 4 years old; me using a pen was out of the question, so the school taught me how to use the computer with one hand.

Over the years computers evolved and I’ve adapted by

teaching myself every time Windows change from 3.1, 95 and 98.  Between 1994—1998 I went to college learning about computers and getting BTEC and City & Guilds certificates in IT.   I brought my first computer in 1996, before that each computer had been donated to me by charities.  Also had a problem with the keyboard and ending up getting a Maltron Expanded Keyboard.  Soon found out that I needed better, so got my second computer in 1999, using Windows 98; I started to look into building websites, but it was slow getting to pages onto the internet so left it.  2002 came the third computer with Windows XP, plus a new Maltron Expanded Keyboard. and 2005 I had three websites running, they lasted four years, but in this time I learnt everything I needed to put a good website together.  2009 computer number four came along and taught me two things, firstly Windows Vista was rubbish and secondly don’t buy a cheap computer and try to make it better because in 2012 it died.  So straight to pc world for computer number five.  My current computer is the best one so far, along with the fastest internet in the UK and I’ve got the right setup for website building.  So to be asked to put together the website for the Riverside Active Lives Network, I just said yes and now I feel great.  I get to use my skills for a service that I love attending.  Now I’m on my sixth computer, which is a custom built pc by pc specialist and it’s superfast.

My name is Anne Kitchener married to Paul Kitchener.  My disability is Cerebral Palsy.  I cannot speck, so I use a lightwriter to communicate to people.  I live with my two cats.  I enjoy my independents.  I used to teach sign language at Bridge Court Resource Centre.  I go to the Riverside Active Lives Network two days a week to meet people.  I got engaged to Paul Kitchener, on the 14th of August 1999, I felt bit shock and happy at the same time.

In 2009 I started doing cross stitch which I enjoy doing and to date have completed 30 projects.  I also love taking photos and once I got my handle that’s screws onto any camera that was it.  I can now take photos better than some more able people.  So when the Riverside Active Lives Network asked me to be their official photographer, I just said yes and now I feel great.  I just say no matter what your disability is everyone has a skill that can be put to use somehow. 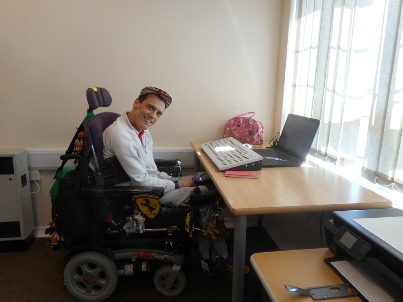 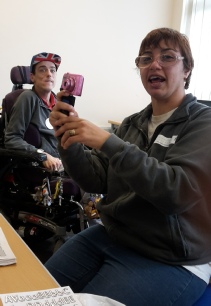